Downplays | Harris Downplays Politics, Immigration Reform:  After intense criticism of the Republicans during the visit, the Vice President visited a few border facilities and spoke to migrants and stakeholders.

Vice President Kamala Harris Friday emphasized the importance of dealing with the root causes of migration and urged politicians during a regular visit to the U.S.-Mexico borders that was supported mainly by political politics to deal with the issue with “a sense of humanity.” 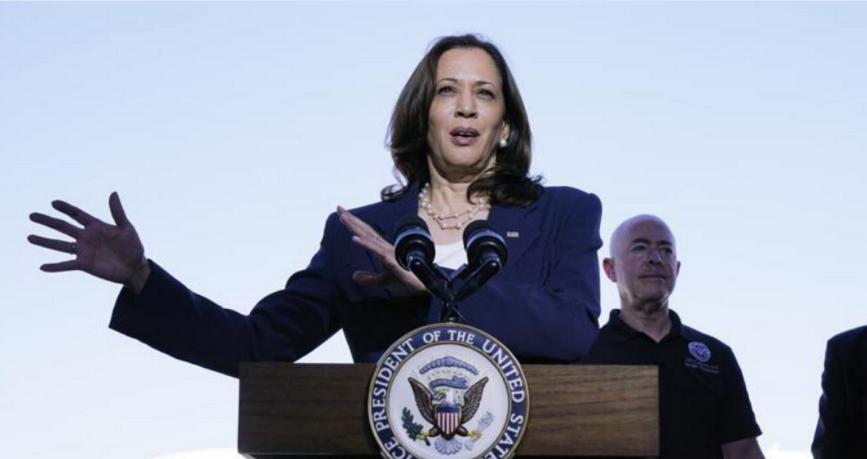 Only days before a trip to the border with Texas by former president Donald Trump, Greg Abbott, and a Republican legislator contingent comes Harris. The Republicans have strongly criticized the border management by the Biden administration. Hence which they contend with being a situation of “crisis.”

In recent weeks, the GOP has launched a flood of criticism that Harris, who was assigned to address immigration drivers by President Joe Biden, had not visited the border region yet. Harris traveled to Guatemala and Mexico earlier this month, and she and her team have repelled the root causes of migration well into the United States.

Reform in Country And Congress

Despite the back and forth, Friday’s trip told Harris that immigration “cannot be reduced to a political issue.”

“We’re talking about kids, we’re talking about families, about suffering. And our approach must be thoughtful, practical. We can consider all these perspectives and have a meaningful, sound public policy, “She said at a press conference.

“If we stop the rhetoric and finger-pointing and do what we need to do, including agreeing. As Chairman Durbin has been doing for years, we need immigration reform in our country, and Congress must act. Let’s agree that you can’t just react to a problem without solving it at its roots, “Harris’s said.

When Harris announced earlier this week that she would travel to the border, Republicans lamented that she was visiting the wrong border. She should visit the Rio Grande Valley instead of El Paso because it has seen higher illegal crossings.

Mayorkas and Harris appeared to address that criticism directly during the press conference.

“I recommended the vice president to visit El Paso because it’s one of the border’s busiest sectors. El Paso reflects many elements of our mission, “Mayorkas’s said.

He also noted that facilities in the area were representative of the government’s progress in transferring unaccompanied migrant children from border facilities to shelters run by the Refugee Resettlement Department of Health and Human Services.

Administrative officials and experts agree that border patrol stations are inappropriate places for children to stay. Therefore law requires children to transfer from facilities in 72 hours. The number of minors in border facilities has plummeted in recent months after the administration established several additional facilities and shelters.

The president and vice president directs me to take care of it in executing my responsibilities as secretary of home security. The situation today is dramatically different. Border Patrol station isn’t overcrowded with kids,” he said.

While in El Paso, the vice president toured the entrance facility’s Border Patrol station and Paso del Norte. She also spoke with several unaccompanied migrant girls and had a roundtable discussion with religious NGOs and service providers.

However, the vice president did not visit the nearby Fort Bliss emergency influx facility where 1,500 migrant children currently stay. Children there are experiencing severe mental health concerns, according to reports. Previously, the White House said it significantly reduced the number of children at the facility, and there are currently 50 on-site mental health professions. Friday, the White House said it directed HHS Secretary Xavier Becerra to investigate the situation.